The IMC blog entered a short position in the May sugar/corn spread on February 13th when the value of one sugar contract closed at a premium of +$3,251.30 over the value of one corn contract.

Early this month, the corn contract finally closed with the premium value.  That hasn’t happened since last June.  We are taking this as confirmation that the expected bear market is firmly intact.  Based on history, we expect to see this spread decline several thousand more dollars before it’s all said and done.

Today, we are going to do two things.  First, roll the May contracts to the July contracts.  First Notice Day is just a few days off.

Secondly, we are going to add to the short position.  The spread has been consolidating in a tight range for the last three weeks.  This pattern gives us a low-risk setup to get short on a breakout of the range and risk to the other side of the range.

Place a hypothetical contingency order to sell one 112,000 lb. July sugar contract and simultaneously buy one 5,000 bushel July corn contract if the spread closes below the April 5th low of -$436.20 (premium corn).  If filled, liquidate the position on a three-consecutive day close above the April high (currently at +$437.10).

At the beginning of the month, the IMC blog took a hit on a position on the long side of the December crude oil/natural gas (x2) spread when it smashed prior price support to smithereens.  However, the fact that the spread looked overdone and the fact that the December crude/nat gas ratio appeared to be establishing a double bottom lured us back in.

Not only did we go back in, but we went in aggressively.  The trade strategy was to get back into a long position with an initial exit signal if the ratio broke the double bottom.  Then we’d add more once the spread close back above the “ice level” of -$17k.  Finally, a third purchase would be made if the December crude oil/natural gas (x2) spread could clear the July high and close above -$14k.

This took place over the last week and a half.

We are now loaded up.  Initially, we are looking for the spread to reach a resistance zone between the March 7th high of -$6,840 and the May 18th high of -$5,730.  Once the spread gets into this area, we will monitor the price behavior closely to determine our next course of action.

If the December crude oil/natural gas (x2) spread starts to flounder in the resistance zone, we may take partial or all profits on the trade.

If strength persists, however, we may just sit back and let it ride.  It is possible that the spread could be on its way up to challenge the 2015 high of -$1,540.

The blog entered a short position in the September soy meal/bean oil (x2) spread at +$500 (premium meal) on July 7th.

The blog then entered a second short position in the September soy meal/bean oil (x2) spread at -$3,386 (premium bean oil) on August 2nd. 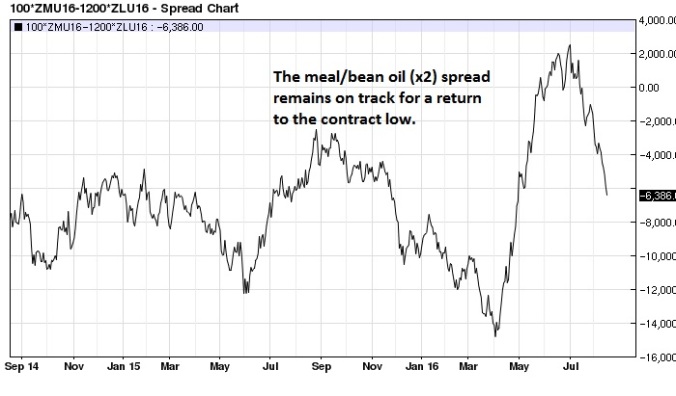 With the ‘add-on’ entries, the position has increased three-fold.  We are now going to risk all three positions to a two-day close above -$3,892 (premium bean oil), which is $2k above the most recent ‘add-on’ entry price.

Eye On the Ball

Our minimum downside target for the September soy meal/bean oil (x2) spread is the contract low of -$14,778, but we could easily see a descent to -$20,000 (premium bean oil) or lower.  Therefore, we will continue our pyramiding strategy to add every $2k down.

The blog will sell another September soy meal/bean oil (x2) spread on a close below -$7,892 (premium bean oil).  If filled, exit all four spreads on a two-day close of $2,000 or more above the entry price of the fourth spread.

The Crush Spread Is Getting…Crushed

In addition to triggering the ‘add-on’ short sale signal, the spread also did some technical damage when it closed back under last summer’s peak at -$2,518.  The close back under this high negates the mid-May breakout. 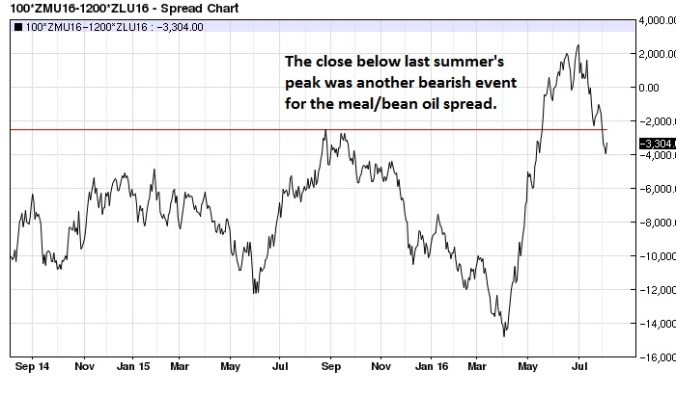 We are looking for the September soy meal/bean oil (x2) spread to return to the contract low of -$14,778.  But since most bear markets that occurred after meal reached a premium over bean oil descended to -$20,000 (premium bean oil) or lower, it would not be at all surprising if the spread fell right through the bottom of the chart.

As per the pyramiding strategy we laid out in the previous post on this spread, the blog will continue adding to the position every $2k down.

The blog will sell another September soy meal/bean oil (x2) spread on a close below -$5,386 (premium bean oil).  If filled, exit all three spreads on a two-day close of $2,000 or more above the entry price of the third spread.

The blog entered a second short position in the Dec-Nov soy meal (x2)/soybean spread at +$17,690 (premium meal) on August 2nd.

At the very least, we are looking for the December spread to return to the April 4th contract low of +$8,975.  However, historic precedent makes it a reasonable expectation for the spread to ultimately make it to ‘even money’ or lower.  Therefore, we are going to continue adding to the short position in $3k intervals.

The blog will sell a third Dec-Nov soy meal (x2)/soybean spread on a close below +$14,690 (premium meal).  If filled, exit all three spreads on a two-day close of $3,000 or more above the entry price of the third spread.

Usually, we don’t like to buy a spread when it’s plummeting.  The reason we took the chance on this one, however, is because it seems to find a bid down at these levels.  The spread finished at -$17,690 today.  As we noted before, the December crude oil/natural gas (x2) spread just hasn’t been able to stay below -$17k for more than a day or two over the last couple of years.  It’s been like trying to hold a helium balloon underwater.  So if you want to try picking bottoms, this is certainly the place to do it.

We also mentioned in the previous post that the last three drops below -$17k were followed by rebounds of nearly $16,000, approximately $13,500, and $13,300 over the following months.  So we’re looking for a sizable bounce to start soon.  Therefore, we would like to quickly add to the position if the spread does start to recover.

So far this month, the small bounces in the December crude oil/natural gas (x2) spread have ended either side of -$14,500.  Prior drops below -$14k have only lasted four weeks at the most.  Anybody who bought the spread at -$14k or lower and held on never had to wait for more than a month before the position was profitable. 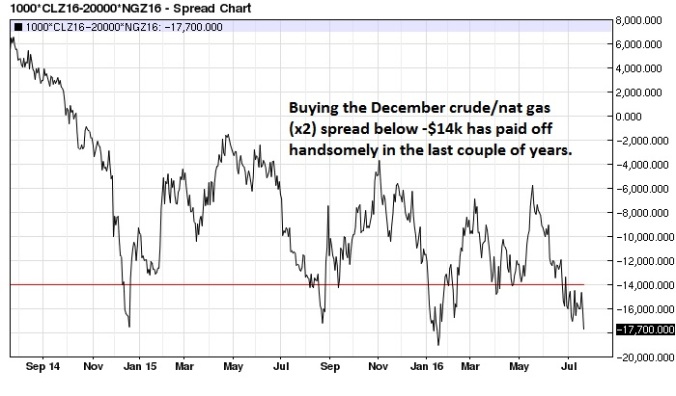 Since the spread has already been below -$14k for just over three weeks, we can use a close back above this level as a signal that the bottom is in.  Furthermore, a close above -$14k would mean that the position we entered at -$17k is already showing an open profit.  This would allow us the cushion we need to add to the trade.

For tracking purposes, the blog will make a hypothetical ‘add-on’ trade by buying one December 1,000 barrel crude oil contract and simultaneously selling two December 10,000 MMBtu (million British thermal units) natural gas contracts on a close above -$14,000 (premium nat gas).  Initially, this ‘add-on’ spread will be liquidated on a two-day close below -$17,000.

The IMC blog shorted the September soy meal/bean oil (x2) spread at +$500 (premium meal) on July 7th.  Prior bull markets that put the meal side of the spread at a premium were followed by bear markets that took the soy meal contract to a discount of at least $10k to a pair of bean oil contracts.

As a matter of fact, a majority of the bear markets crushed the spread down to -$20,000 (premium bean oil) or lower.  So with the spread hitting a two-month low of roughly -$2,500 this morning, this means there’s still a lot of potential money to take off the table in this trade.  Therefore, the blog is going to pyramid this position by progressively adding more spreads as the price decline continues.

As we explained in the post on the soy meal (x2)/soybean spread, a method I like to use for determining the ‘add-on’ levels or intervals is to measure the countertrend moves of the prevailing trend.  Then we set the intervals at a larger size than the countertrend bounces in order to give the spread the room it needs for countertrend moves without running a high risk of getting our exit parameters triggered.  In other words, we are measuring the volatility and trading around those measurements.

Until mid-June, the largest pullback that the spread made was $1,362.  It finally saw a correction of $2,130 off the mid-June high and a final top was established a couple of weeks later.

So up until mid-June the countertrend moves maxed out below $1,400 and since the current peak, the countertrend bounce was just over $1,100.  This indicates that the volatility is not that great.  We’ll use that to our advantage and set the ‘add-on’ intervals at $2,000 to add to the position.  This is several hundred dollars more than the typical countertrend moves on the ride up and, so far, on the way down.

If the ‘add-on’ order is filled, sell a third September soy meal/bean oil (x2) spread on a close $2,000 below the entry price of the prior ‘add-on’ position.  If filled, exit on a two-day close of $2,000 or more above the entry price.

If the second ‘add-on’ order is filled, sell a fourth September soy meal/bean oil (x2) spread on a close $2,000 below the entry price of the most recent ‘add-on’ position.  If filled, exit on a two-day close of $2,000 or more above the entry price.

On June 23rd the IMC blog initiated a short position in the Dec-Nov soy meal (x2)/soybean spread at +$21,125 (premium meal).  The spread touched a two-month low this morning, so the trade is making some headway.

Prior tops at +$20k or higher (premium meal) were followed by drops back under +$9k (premium meal).  Therefore, we fully expect the Dec-Nov soy meal (x2)/soybean spread to return to the April 4th contract low of +$8,975. 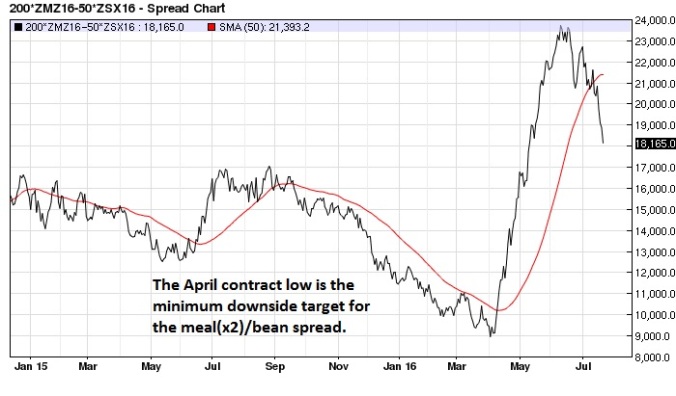 Furthermore, prior to the 2012 drought, tops established north of +$20k were followed by bear market declines to ‘even money’ or lower.  So a break of the April low could indicate that the Dec-Nov soy meal (x2)/soybean spread has further downside potential of several thousand more dollars.

Given the fact that the spread seems to be in a fast decline and our minimum downside price expectation is several thousands of dollars away, it makes sense to pyramid this position to take full advantage of the decline.

We’re going to add more short positions as the spread declines.  The ‘add-on’ positions will be entered in intervals as the down trend continues.  The trick, of course, is to know where to set those ‘add-on’ intervals.

One method I like to use is to measure the countertrend moves of the prevailing trend to get a sense of how much room we need to give the spread.  Then set the intervals at a size that is wider than the countertrend moves.  That way, we are allowing the market to have the breathing room that it has already demonstrated that it needs.

If the second ‘add-on’ order is filled, sell a fourth Dec-Nov soy meal (x2)/soybean spread on a close $3,000 below the entry price of the most recent ‘add-on’ position.  If filled, exit on a two-day close of $3,000 or more above the entry price.