Over the last week and a half, the spread has bounced from trading near contract lows to closing just above resistance between the November 1st bounce high of -$21,195.60 and the declining 75-day Moving Average around -$21,336.20.  It’s do-or-die right here.

On the nearest-futures chart, the cocoa/sugar (x2) spread is sitting just below that same resistance level between the November 1st bounce high and the declining 75-day Moving Average.

The ratio between the value of a 10-tonne cocoa contract and a 112,000 lb. sugar contract recently tagged 1:1 for the first time in over four years.  Prior bull markets that peaked at a ratio of 2.5:1 or higher were followed by multi-year bear markets that took the ratio below 0.8:1 each time.  Therefore, the current bounce could be nothing more than another bear market rally.  These are short sale opportunities and will remain so until the trend changes.

Due the decline in the ratio, the IMC blog will adapt by taking additional ‘add-on’ signals for a spread between one cocoa contract and one sugar contract.  This keeps it more dollar neutral. 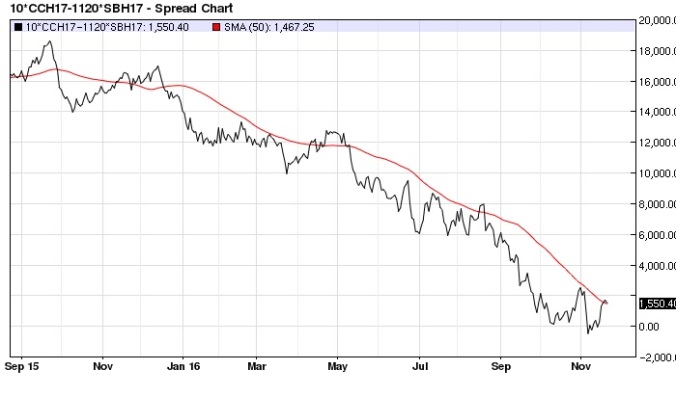 Viewing the March cocoa/sugar spread, one can easily see that the downtrend remains fully intact and that bounces into the declining 50-day Moving Average have been selling opportunities.  Therefore, we have a green light to add to short positions right here.

Work a hypothetical contingency order to sell one 10-ton March cocoa contract and simultaneously buy one 112,000 lb. March sugar contracts at +$1,550 (premium cocoa) or better.  Initially, this ‘add-on’ spread will be liquidated on a two-consecutive day close above +$3,000 (premium cocoa).