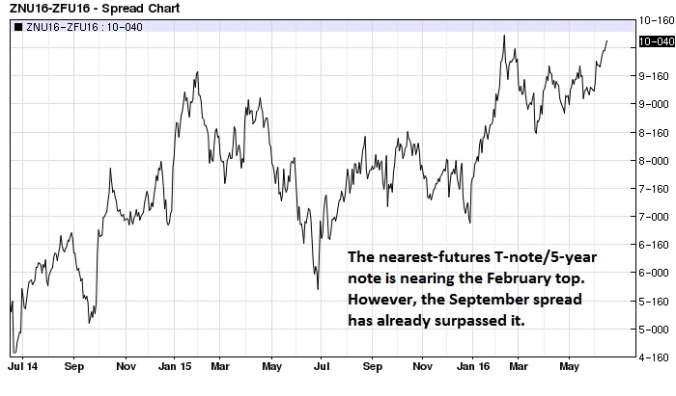 On the nearest-futures chart, the T-note/5-Year note spread is less than one-quarter of a point shy of matching the multi-year high that was posted in February.  However, the September spread has closed well above it for the last four days in a row.  This puts it within striking distance of the 2012 top at 11-02.5.

The US interest rate spreads have continued to surge on safe-haven buying and ideas that the Fed will put off any further rate hikes in the near-term.  US economic data is not living up to expectations.

Furthermore, negative yields around the globe are spreading like a contagion.  Worries about next week’s Brexit vote have caused the 10-year Euro bund to hit a negative yield for the first time ever and the Swiss 30-year bond even went negative.

Seriously, who wants to lock in a negative rate –meaning that you are paying the government to borrow from you- for three decades?!  This is insane.

This is going on in Japan, too.  Their 10-year yield dropped to a new record in negative territory.

One of these days, people are going to pause and think about what they’re really buying when they purchase treasuries with negative interest rates.  When common sense starts trickling in, treasuries could experience a complete meltdown.  Therefore, spread traders should continue to monitor interest rate spreads for short sale opportunities.