Remember the ol’ hog/corn spread? It’s been making a comeback. The August-September hog/corn spread has risen over 50% from the multi-month low that it posted just two months ago. A new trading opportunity may be shaping up.

Recall that this spread works because of the relationship between the end product (hogs) and the feed costs (corn). The feed counts for two-thirds to three-quarters of the cost of production.

The ratio between 100 lbs. of hogs and one bushel of corn is considered normal when it is somewhere between 22:1 and 25:1. The current prices of August lean hogs and September corn set the ratio just under 23:1. This is nothing to write home about. Historically, the high-probability short sales show up after the ratio surpasses 32:1. 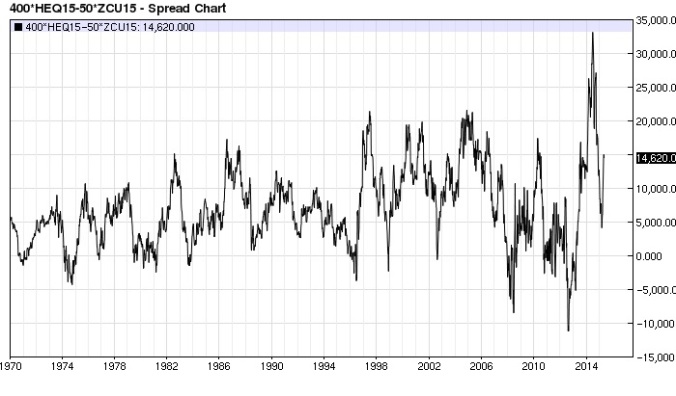 However, the spread between the values of one 40,000 lb. August lean hog futures contract and one 5,000 bushel September corn futures contract hit a multi-month high of +$15,640 (premium hogs) just last week. This is something to pay attention to. Since the hog/corn spread first reached the +$15k level thirty-three years ago, there have only been seven times when the spread reached +$15k or higher, basis the weekly nearest-futures. Each time, the spread eventually rolled over and dropped $17,000 or more from the highs. Therefore, the August-September hog/corn spread is now a short sale candidate.

The August-September hog/corn spread established a double top at the October and November peaks and then dropped precipitously into the March 23rd low. On May 5th the spread closed above the Fibonacci .618 retracement of the entire decline and temporarily peaked a week later. This is an ideal place for a secondary lower high to be established. We now need to see some evidence that the two-month rally is over before taking a shot at the short side. 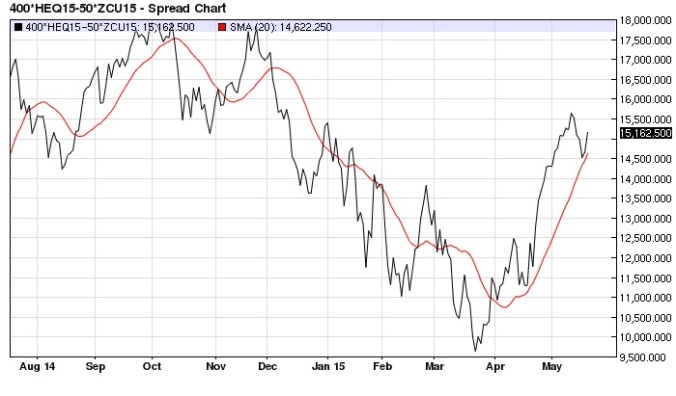 If the bounce fails, it could be high time to short the August-September hog/corn spread since it would be back under the major Fibonacci .618 resistance line, beneath the recent May 18th pullback low, and below the 20-day MA for the first time since late March.

For tracking purposes, the blog will make a hypothetical trade by selling one 40,000 lb. August lean hog contract and simultaneously buying one 5,000 bushel September corn contract if the spread closes below +$14,500. Initially, the spread will be liquidated on a two-consecutive day close $500 above the multi-month rally high that precedes the entry (currently at $15,640).