The exit strategy was to liquidate the February live cattle/lean hog spread on a two-consecutive day close above 82.42. These parameters were triggered on December 30th when the spread closed at 83.52. This resulted in a hypothetical loss of -$3,268 on the trade. 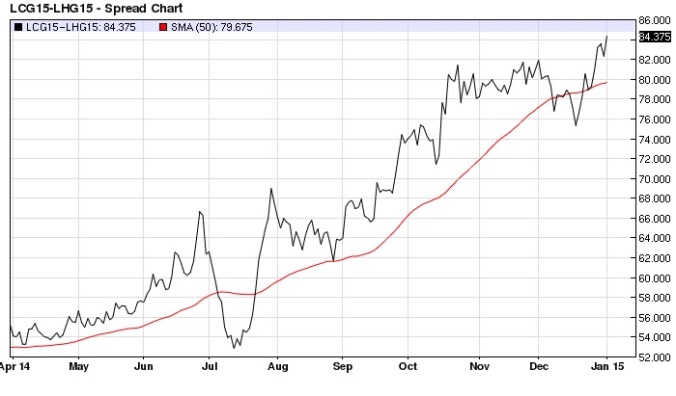 Since it will be February in just a month, it may be prudent to look at the further out April spread in order to add a little more time to the spread for a reentry attempt. Last month the April live cattle/lean hog spread altered its bullish price structure when it traded below a prior month’s low for the first time since the mid-July correction low was established. It made a new contract high by the end of the month, creating an ‘outside bar’ with an upward reversal on the monthly timeframe. This makes the December low of 73.65 an important near-term support level. Therefore, a spread trader could use a break of the December low as a reentry signal on the short side. Since the blog is tracking the spreads with hypothetical trades, that’s exactly what we’ll do.

For tracking purposes, the blog will make a hypothetical trade by selling one 40,000 lb. April live cattle contract and simultaneously buying one 40,000 lb. April lean hog contract if the spread closes below the December 17th low of 73.65. Initially, the spread will be liquidated on a two-consecutive day close of half a cent (50 pts.) above the contract high that precedes the entry (currently at 81.07).